The Winter Park Art Festival and Getting to Meet Gail Carriger

We drove all the way to Winter Park and back in a single day (about 10 hours in the car), but it was for a good cause. One of my favorite authors, Gail Carriger, was doing a book signing at the Writer's Block Bookstore.

The Winter Park Art Festival was also going on only about a block away from the bookstore, so we arrived early to wander around.

Parking is usually a problem during the Art Festival, but it rained most of the day, so downtown Winter Park was delightfully free of crowds and we found a surprisingly close parking space.

The rain cooled things off, so that the temperature was much more comfortable than the 80+ degrees that had been predicted and it did stop raining in the late afternoon.

These fantastic teapots are all functional:

It's hard to tell in this picture, but the potter/sculptor, Robert Kastrino is holding a sleeping baby squirrel in his hand. The tiny squirrel had fallen out of a tree behind his tent the day before and had crawled into his hand for comfort both Friday and Saturday.

The professional artists were not the only ones with their art on display. The Winter Park Art Festival always includes tents full of local students' art.

Blaze and I being silly:

After exploring the entire art show, we had a dinner at the Bosphorous, a Turkish Restaurant, since that is something we don't have in Tallahassee. The food was excellent!

For Gail Carriger's book signing, we had come up with a quick costume for Blaze. He is supposed to be a "Piston", one of the cool kids at Bunson's, the boys' school for evil geniuses in the finishing School series. 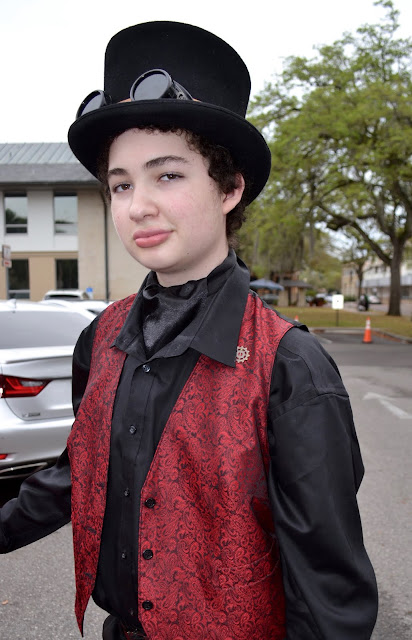 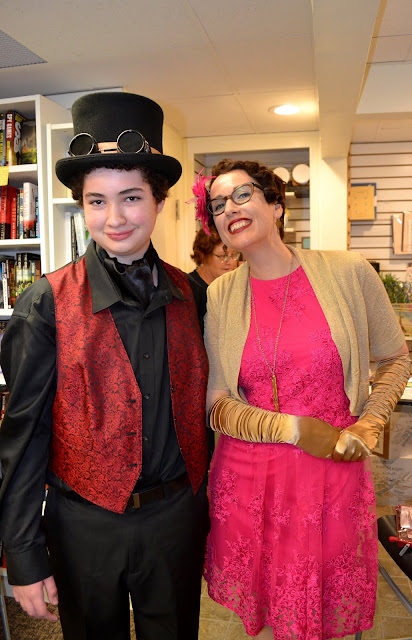 The question and answer period before the book signing was a lot of fun! Gail Carriger is just as good at telling stories in person, as she is in her books, and just as humorous. Her beautiful, bright pink, lace dress and constant smile brightened up the tiny bookstore. The space was not really designed with popular authors in mind and fans were packed in tightly to see her, but everyone was so friendly and polite, that they managed to squeeze in each new arrival.

This was the first time that Blaze had ever met the author of one of the books we have read and I'm glad that he enjoyed himself. He was acting a little shy at the bookstore, but afterwards he said she was very funny.

For tonight's bedtime story, we are beginning Gail Carriger's book, Curtsies and Conspiracies.

Shrimp Dip for a Spring Picnic

This recipe is based on a recipe my mom use to make for her microwave cooking classes and demonstrations when I was a teenager. My only addition to the original is the can of tiny shrimp.
I served this on "party rye" bread at the picnic that my son and I had last week. The following day, I served some in little cucumber cups and my son said he liked that even better, because he thought the rye bread was too dry. My mom served it as a dip for potato chips. So, it is quite versatile.

1 can of Cream of Shrimp Soup

1 4-ounce can of Tiny Shrimp

The dip can be made a day in advance. It will keep for 3 or 4 days in the refrigerator in an airtight container.

Although he didn't finish building this racer until the night before the race, Jusnel's skill with an remote controlled car meant that Silver Creamer came in second in over-all points, with a total score of 75, at Renninger's Steampunk Industrial Show on January 23, 2016.

He may not have received full points for the quality of his bribe, but it was funny when he he handed the judges the single serving package of Goldfish crackers.


This was the best maneuvering through the slalom of candle sticks. If you listen carefully to the video, you can hear the impressed spectators, as well as Jusnel's very proud son shouting, "Go, Dad!" followed by, "That's my Dad!"

Posted by Crescent Moon at 7:33 AM No comments: