Teapot Tuesday, Featured Teapot Racers: A and B Racer and InsaniTea

We have two featured teapot racers today, driven by siblings, Bella and A.J. Cardoni. My understanding is that A and B Racer was a joint project.

Bella drove A and B Racer in the Sunday Splendid Teapot Races at Big River Steampunk Festival in Hannibal, Missouri on sept 4, 2016. She completed the course in only 1 minute and 9 seconds.

I would particularly like to thank Bella for all her help before the races began! As soon as her teapot racer was registered, she stuck around the booth and was a huge help in setting up for the races.


A.J. drove InsaniTea, one of the teapot racers I built. He had never driven this particular vehicle before, but still managed to finish the course in 1 minute, 30 seconds.


These are the last of the featured teapot racers I will be posting until February. I hope everyone has a  Splendid New Year! 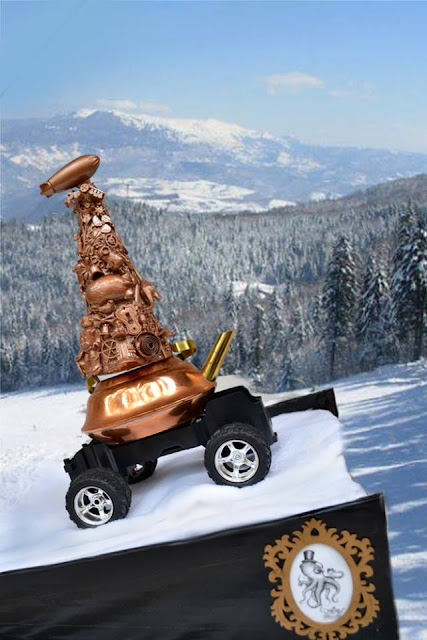 I haven't done one of the literary tea party menus for a long time, but I was feeling inspired this week. I recently finished reading the 6th of Naomi Novik's Temeraire novels, Tongues of Serpents, aloud to Blaze and he's looking forward to getting the next book in the series.

The Temeraire series deals with the adventures of Captain William Laurence, a navel officer who captures a dragon egg from a French ship in 1805.

When the egg hatches and the dragon imprints on Captain Laurence, he must leave the Navy to join the British Aerial Corps and the reader is introduced to a world where dragons are an important part of the war against Napoleon.

Blaze chose chocolate for the cake, because the dragon, Temeraire, is a black, Chinese, Celestial dragon.

The savory parts of the menu are based on things that Temeraire ate, with the exception of the eggs.

Today's featured teapot racer is Speed Reader, one of the vehicles that I built to loan out to people who wanted to try teapot racing, but didn't have racers of their own.

On Sept. 3, 2016, Marantha Blum drove it at the Big River Steampunk Festival in Hannibal, Missouri. She exceeded the time limit, but she did well driving, considering that she had had no practice time with the unfamiliar vehicle.

The following day, Cheshire drove Speed Reader and completed the course in 1 minute, 36 seconds and only one manual assist.

He completed the course in 1 minute, 44 seconds with 2 manual assists. He received extra points for quality of the judges' bribes and showmanship.

The rainy weather at Renningers was not kind to Speed Reader. The books were damaged and will need to be repaired before it races again.

I am now out of racers from Renningers to feature on Teapot Tuesday, until the end of January, when we races again.