I have been baking and the house smells wonderful. One of the treats we will be having later today, as part of our New Year's Eve celebration, will be orange shortbread cookies. Cream butter and sugar together with an electric mixer. Add orange zest and juice concentrate. Beat. Add flour and beat until a dough is formed. Roll the dough into a log shape and cover with plastic wrap. Refrigerate 30 minutes - 1 hour, until the butter in the dough has set up. Cut the "log" into 1/2 inch slices and place on a cookie sheet. Press a pecan half into the center of each cookie. Bake for 30 minutes.

Makes about 2 dozen cookies
Posted by Crescent Moon at 12:31 AM No comments:

It's been a wonderful, lazy Christmas day.

The wrapping paper that Blaze made for my present:

Blaze was very happy with all his gifts. He kept yelling "awesome!" which turned out to be really funny when he opened a package fro my mother with a red T-shirt that said "awesome" on it.

The snacks to sustain us the rest of the day:

This is my favorite gift:

DH enjoying his gifts, the inflatable Star Trek Captains chair and the last book in The Game of Thrones series.

I hope that all of you had a wonderful day, too!
Posted by Crescent Moon at 7:43 PM No comments:

Email ThisBlogThis!Share to TwitterShare to FacebookShare to Pinterest
Labels: Christmas

The gifts are all wrapped or sent to distant family members, the decorations are up, and most of the baking is done. Time to enjoy time with family. I hope everyone has a wonderful Christmas Eve and a magical Christmas morning!
Posted by Crescent Moon at 12:21 PM 2 comments:

Every Year at Christmas time, I real aloud Christmas in Noisy Village, by Astrid Lindgren (the author of the Pippi Longstocking books). It's a sweet picture book about three families in Sweden, celebrating a simple, mostly homemade, Christmas together.

One of the pages in the book shows two little girls using red sticks of sealing wax to hold wrapping paper closed on gifts.

Blaze had never used sealing wax before and I had never used it on presents, but it turned out to be the perfect solution when the tape kept popping off our very slippery, metallic wrapping paper today.

Posted by Crescent Moon at 4:43 PM No comments:

Florida Steampunk 2012 (The Year in Review)

It's been an exciting year for steampunk in Florida! 2012 was not only a year full of activities planned by regional groups, but was also the year of the state's first Steampunk Convention. This video actually starts on New Years Eve 2011 and ends Dec. 11, 2012. The photos in this video were taken by people all over the state and set to the music of Professor Elemental and Abney Park. If you live in Florida and are interested in steampunk, the list of local groups appears at the end of the video. All of the groups can be found through Facebook.

Posted by Crescent Moon at 3:45 PM No comments: 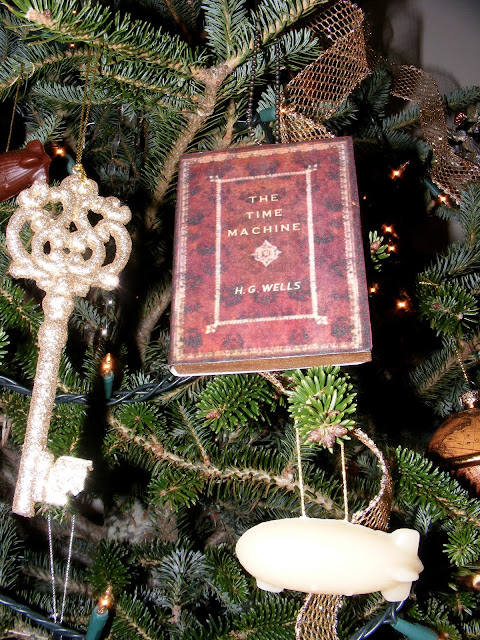 DH and I have been collaborating on ornaments that look like some of our favorite books. He creates wonderful book covers on the computer and prints them out onto cardstock. I create the wooden core of the ornaments, that will look like pages, attach the covers, and apply Mod Podge to the entire creation. Thanks to DH's talent, these are really stunning little "books".

It may not be Christmasy in nature, but this one is lovely Christmas colors: 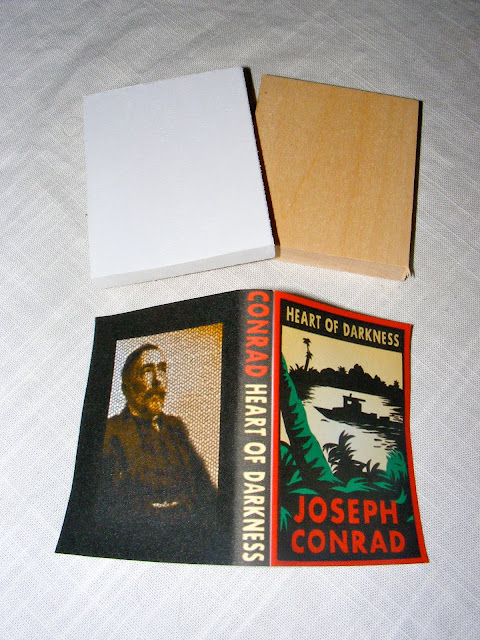 The "leather" bound books look best with our other ornaments, though. For those, I'm using antique gold Rub 'n Buff for the "pages". 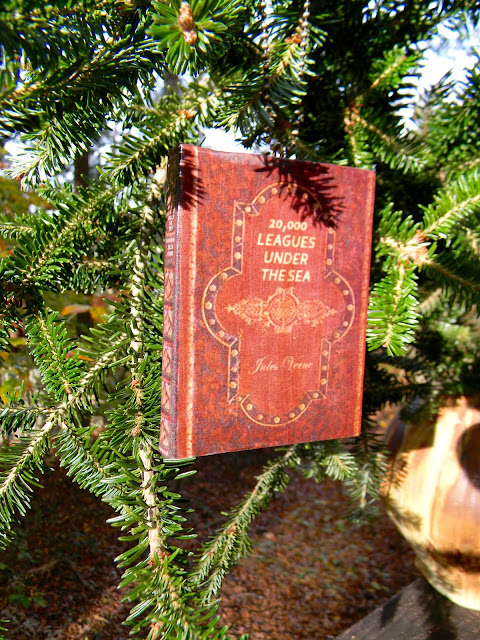 The back of the book: 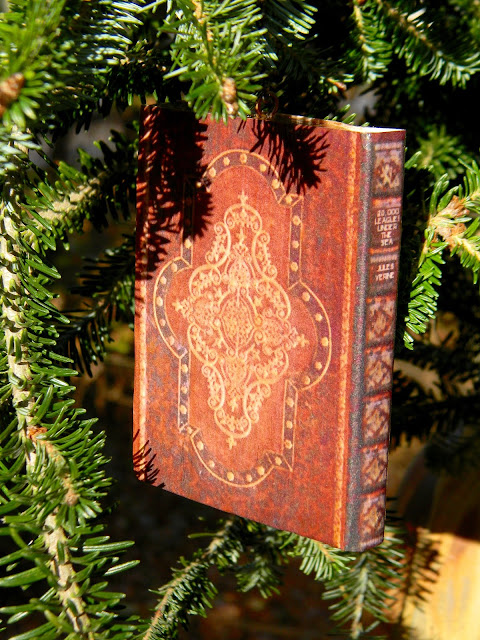 I also chose a modern favorite for one of the books. 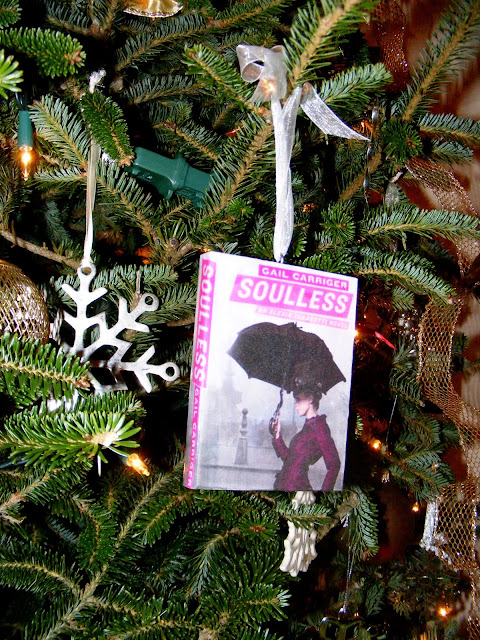 The back cover. When DH found this photograph online, he kept talking about what a cute picture it was. 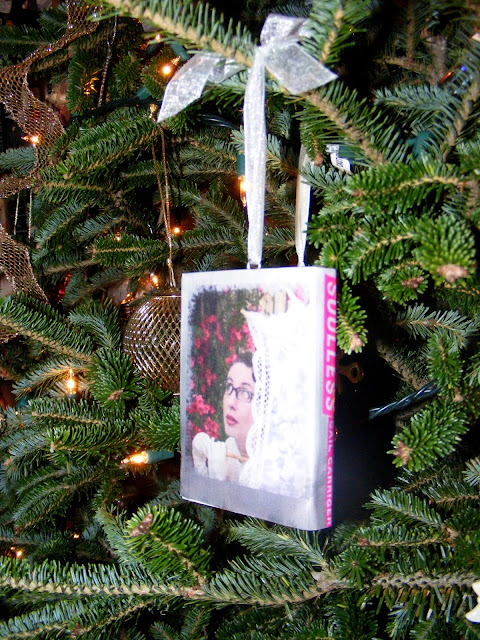 A Busy and Festive Week

I am happy and exhausted. It really has been quite a week!

Monday was the first day of a new babysitting job for an adorable two year old, as well as being the day of the "manly" tea party.

Wednesday, Blaze helped me trim the bottom branches of the Christmas tree.

I then managed to carry it around the house, in the front door, and wrestle it into the tree stand. By the time DH got home from work, all the ornaments and lights were out and ready to be put on the tree.

We had a very relaxed evening of eating pizza, listening to Christmas music, and decorating the tree.

Blaze has finally become too big to be lifted up to put the tree topper in place, although DH did try.

We also lit the candles on the little tinsel tree in Blaze's room for the first time this year.

Thursday (yesterday) was Blaze's birthday, but we postponed the celebration for a day so it wouldn't be overshadowed by the other thing we were doing, the Tallahassee Homeschool Group craft fair at Optimist Park.

For anyone who thinks that ninja cake pops would be a fun project, these were the most difficult thing I did all week. I started baking little round cakes around noon yesterday, stayed up until 12:30 last night decorating them, and finally finished decorating them at 4:00 this afternoon.

He was so happy and excited about the presents he opened that Blaze had tears in his eyes.

We stuffed ourselves with sushi, rice crackers, katsu chicken, rice, limeade, and birthday cake. Then Blaze ran off to his room to put together the new Lego kit, while DH promptly fell asleep.

Posted by Crescent Moon at 8:15 PM No comments:


Due to a long standing family joke, the third day of our advent calendar is dedicated to manly tea parties.

For days now, Blaze has been bring me cups of imaginary tea, which he calls "apple crumble tea", every time I sit down at the computer. He even rigged up a robot delivery service, so I could have refills. So, for today's tea party, DH and I helped him make his own tea blend that really does taste like apple crumble.

Blend well. Steep for four minutes. Serve with a teaspoon of brown sugar to get that real apple crumble flavor.

I've been working on my own culinary experiment, brown sugar casting to make shaped chocolates. It's the same process as sand casting, just with all edible materials.

Make the shape you wish to replicate in the brown sugar.

Pour melted chocolate into the design you have made.

When the chocolate is fully hardened, remove it from the sugar and wash off any excess sugar under cold water. Let it dry.

Posted by Crescent Moon at 4:59 PM No comments:

It's been a fun day!

Blaze started off excited because he was able to open the first box of the advent calendar (he's been very impatient to start doing that).

We went to the park for a couple hours, so that Blaze and I could get to know the little girl I will start babysitting for on Monday and Blaze made a new friend who he's looking forward to playing with again.

Then in the evening, Blaze and I went to the Tallahassee Winter Festival, while DH stayed home to watch a football game and start making fruitcake. Here is a short video of some of the things we saw at the festival.

Posted by Crescent Moon at 10:32 PM No comments: