I'm updating an old costume before we go to Dragon*Con this year.

I've added a Sam Browne belt to my explorer's costume, but instead of adding weapons to my belt, I've been adding more dainty accessories that will help me to be prepared for any situation.

I now have a fan holster from one of the venders at the Hoggetowne Medieval Faire, a tea cup holster from Artificer Leather Works on Etsy, and, most recently, I added a parasol frog from Brassroots Leather.

The belt was designed to hold a sword frog (a holder for a ceremonial sword), but I wanted a frog that would hold my parasol instead, so that I wouldn't have to carry it when I was inside. The very talented Jusnel Gonzalez, of Brassroots Leather, custom made this one for me. This was the first time I had ever had something custom made. There was an element of fun and anticipation that doesn't come from buying things that are already made, since Jusnel posted every step of the process on facebook, so I could see the progress, as it was happening.

Today was the first time in a long time that it hasn't rained, so I was finally able to try on the belt and wear it outside for a picture. If it continues to be this constantly rainy, the parasol frog is adjustable, so I can use it to hold an umbrella, as well.

Two days ago, I learned how to make traditional gift bows, so I've been making a few out of the scrapbook ribbon I bought this week (see this post from a couple days ago: http://overthecrescentmoon.blogspot.com/2013/07/no-sew-fancy-bows-using-steampunk.html). 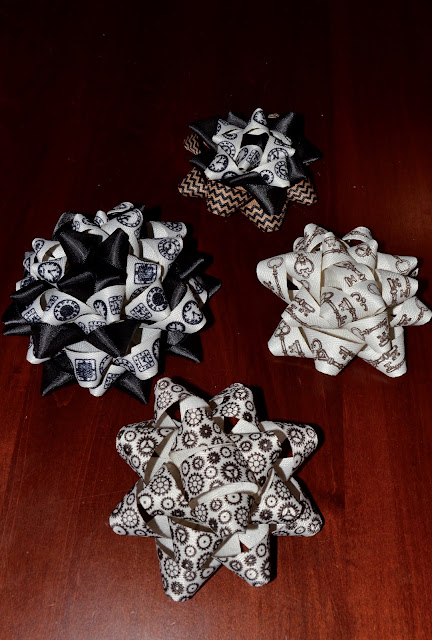 These do take time to make, but they've been keeping my hands busy while I watch t.v. in the evening. I'm starting to associate bow making with Warehouse 13, since that's mostly what Blaze and I have been watching lately. 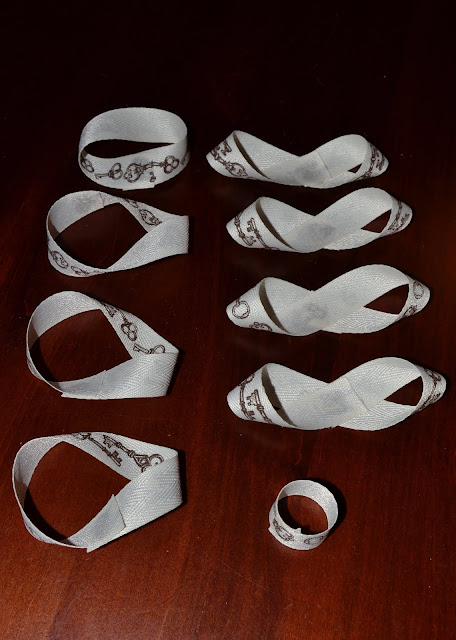 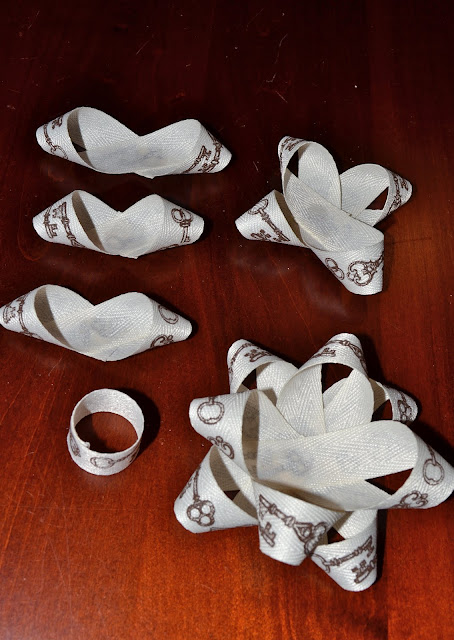 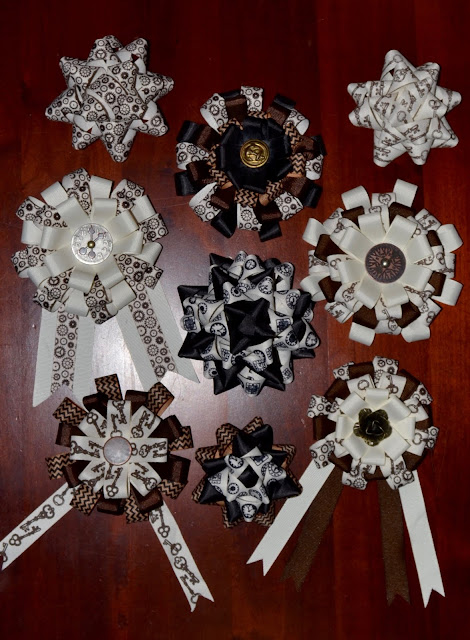 I, also, understand that these cost quite a bit more that buying a bag of bows during the after-holiday sales, but these are reusable. I'm hoping that my family will find these attractive enough that they will look forward to using them every year, the way they do the tree ornaments and Christmas stockings. That way, in the long run, these will be cutting down on expenses and waste.

Posted by Crescent Moon at 4:14 PM No comments:

Today at Wakulla Springs State Park, children from the Tallahassee Homeschool Group had a lesson about Springs, presented by Harley Means, an expert on Florida springs.

A map of Florida springs:

He took us on a walk to look at limestone and sinkholes.

After the 45 minute lesson, it was off to the spring to cool down.

Posted by Crescent Moon at 3:53 PM No comments:

A couple weeks ago, I discovered that the scrapbook section at Hobby Lobby has spools of ribbon for sale that are printed with designs that would work well for steampunk crafts. 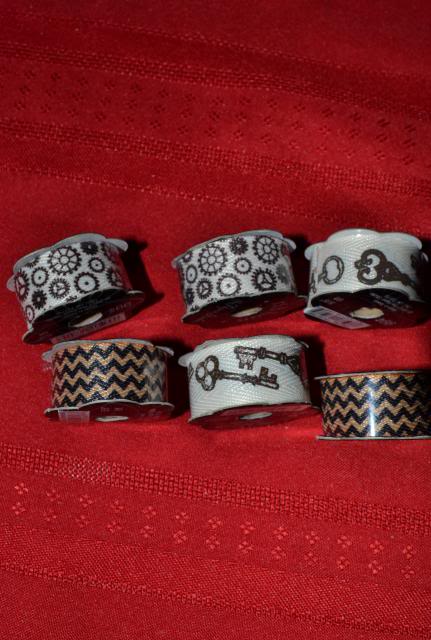 This week, those ribbons are on sale for 50% off, so making fancy bows has become this week's "keep my hands busy while I'm watching t.v." project.

This particular style of bow does not require any sewing. Everything is just glued together.

Each layer of the bow is made from four pieces of ribbon, cut to identical lengths.

The ribbon is first glued to form a circle. Then, a dot of glue is used to pinch the circle together, forming an "8". 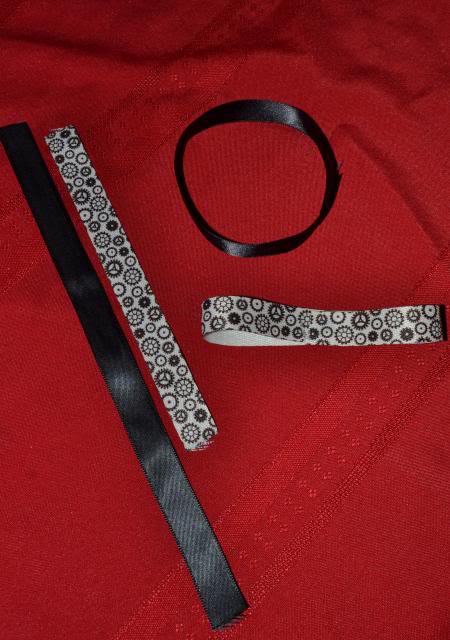 Two of the "8s" are glued together, to make an "X" or more like a plus sign. Then, two "Xs" are glued together to form one layer of the bow. The bow may have two layers or several, but each level should be made with slightly shorter lengths of ribbon than the layer beneath it. 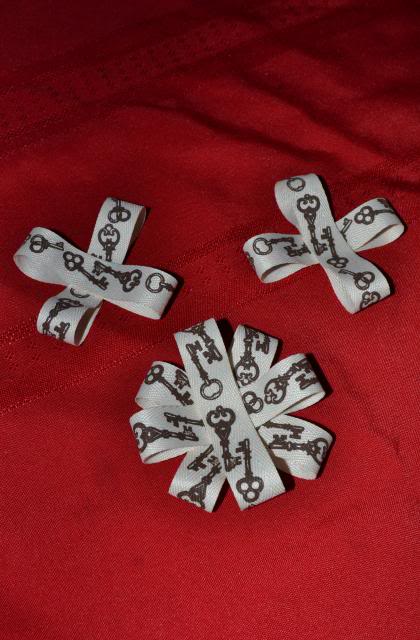 I think that gluing a button or piece of jewelry to the center of the top of the bow gives the bow a nice, finished look. 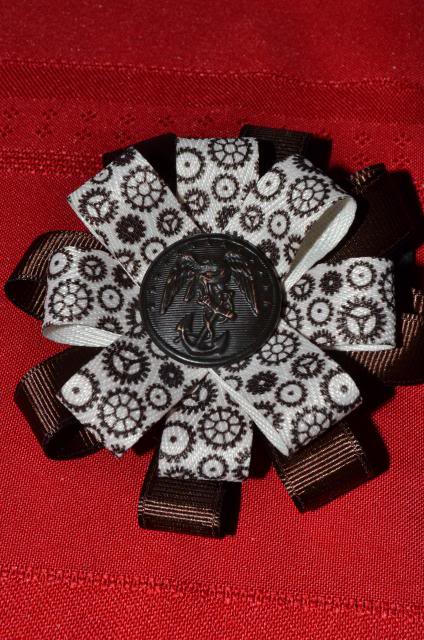 I have made several ribbons this way this week.

By gluing a large, multi-layered bow onto a black satin headband, I made a fascinator for myself. 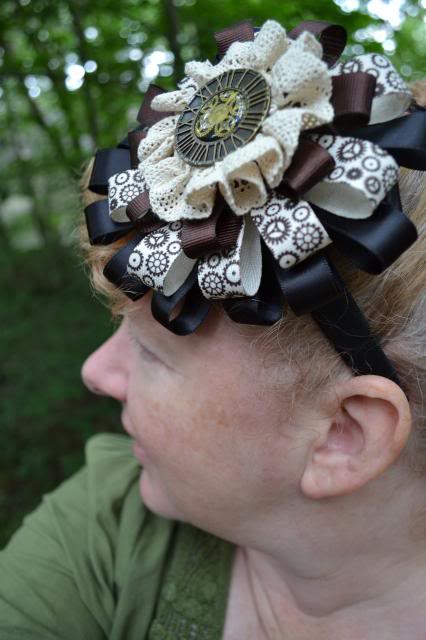 A smaller bow, attached to a ponytail holder, will be good for a child's ponytail. 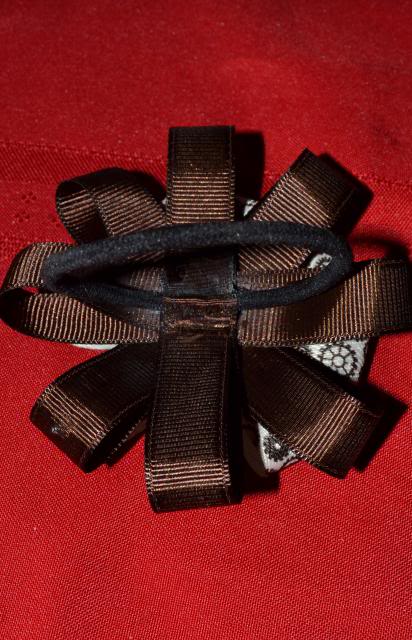 I also made various sizes to decorate gift packages (getting a huge headstart on this year's steampunk Christmas). 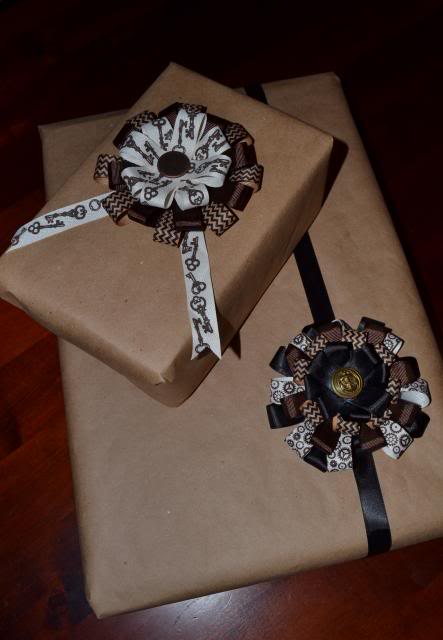 Posted by Crescent Moon at 3:53 PM No comments:

There has been a lot of focus lately on what Blaze is doing. I am also the proud mother of two adult "children".

Ula has been working in retail sales since graduating from college, but she has recently begun writing articles for the Twin Cities Daily Planet.

Both of my older children have been collaborating on a webcomic based on the house where Ula lived while in college. This link will take you to the first page of the comic, "A Day in the Life of a Ficus":
http://ficuscomic.com/comic/001.php


This is my favorite page of the comic, so far:

Nika does the web design and the drawing, while Ula writes the comic.

Ula is now living with her fiance's family, one of whom is an excellent photographer.

This is her fiance at CONvergence this past weekend:

Posted by Crescent Moon at 11:37 PM No comments:

This is our first 4th of July in Tallahassee and it has been a stormy one for most of the day. The internet has informed me that this is not unusual for Tallahassee.


Our power went out for a little more than an hour this afternoon, while I was preparing food for a festive tea time. Luckily, I had everything cooked already, except for melting the cheddar cheese on top of the little twice-baked potatoes. I used the brulee torch for that.

We listened to Blaze's little wind-up radio and had a very nice meal. We had lemonade instead of tea, though, since we couldn't heat water.

After we ate, Blaze and I went outside and threw Snap'n Pops at each others feet in the rain.

Blaze played with sparklers on our flooded back porch. This is probably the safest way to use sparklers, since all the sparks fall into water.

It finally stopped raining, just before the scheduled time for the city's fireworks show. We didn't go to the park where the fireworks show was being held, because we figured that would be too muddy. Instead we went to the Costco parking lot. Quite a few other people had the same idea.

We took these with us:

The lollipops themselves were flavorless, but Blaze had fun playing with the glowing sticks.

I hope everyone else had a safe and fun holiday, too!

Posted by Crescent Moon at 8:36 PM No comments:

Email ThisBlogThis!Share to TwitterShare to FacebookShare to Pinterest
Labels: 4th of July

He is 12 years old, is very friendly and outgoing, and is homeschooled because of developmental delays. He loves Legos, especially Lego Ninjago. He finds reading to be extremely difficult, but is great at following the picture directions that come with the Lego kits.


For any of you who have been following my blog for awhile, you probably have realized that my son, Blaze, is entertaining. He has a great imagination and constantly makes us laugh. He has also had some pretty frightening health challenges and we are very lucky that things have turned out as well as they have.

Blaze has epilepsy. His first seizure happened three days after he was given the chicken pox vaccine, just after his first birthday. The doctor had warned me, at the time of the shot, that three days later, around noon, he would probably start running a fever, so I wasn't surprised when the daycare called to tell me that he had a fever. By the time I drove him home, the seizure had started. I carried him into the hospital emergency room and he was instantly removed from my arms and whisked off to treatment, but the seizure lasted over a half an hour. The seizure did not act like a febrile seizure (one caused by a fever), because it affected just one side of his body and his fever was not that high, but after keeping him in the hospital for a week, the doctors still could not figure out what had caused the seizure. They did not believe that the chicken pox vaccine had cause it, only that it had worked as a trigger for something that was waiting to happen anyway.

He has had several seizures since then. They are not very frequent, going up to two years between the last one and the one before, but some have been severe enough to land him in the hospital for a few days.

Both of Blaze's sisters started walking at a year old, but Blaze did not. He walked while holding onto push toys, but dragged his right foot, which also turned to the side. I took him to a specialist, who told me that all I had to do was have him wear high-top baby shoes to straighten his right foot. I did that. His foot turned forward, but he then began toe-walking on the right side.

It took an MRI, when he was 3 years old, to discover that both the seizures and walking issues were caused by cerebral palsy. There is a small uneven line that showed up on the left side of the brain on the MRI, a cleft where nothing had grown, probably formed during the first trimester of pregnancy.

The cerebral palsy effects the right side of his body, making balancing on a 2-wheeled bike, even one with training wheels, impossible. When he was younger, he had a "big wheel" that he loved, but he is now 12 years old and is too big for that.

We cannot afford a bicycle built to accommodate a special needs child on our own and had signed up for a contest to try to win one. In order to even be entered in the contest, the child had to have 50 people nominate them. I appealed to the Florida steampunk community for help and they came through in a big way. Within 3 hours, he had all the nominations he needed. I couldn't have been more pleased and grateful. When he didn't win the drawing for the bike, I thanked everyone and said we'd just try again next year. That was when I heard from The Airship Annabel Lee's founder Graesyn Fenix. The nonprofit was just getting started and wanted to know if the bicycle could be their first project. I am so excited by this!

The Airship Annabel Lee is collecting both monetary donations and donations of handcrafted steampunk goods to be auctioned off.

For more information about how to help, contact Graesyn Fenix at:
https://www.facebook.com/graesyn.fenix

Thank you for any help you can give!

The music video that Blaze made for a DIY.org project:
The blooper reel:

If any of you see us at Dragon*Con this year, or at any of the Florida steampunk events, please don't say anything to Blaze about the bicycle. He knows nothing about this. If enough funds are raised, it will be a Christmas surprise for him.