Blaze has been growing out of all his old clothes, so we're working on some steampunk wardrobe updates before Dragon*Con.

The striped pants that he wore with his Tesla Ranger costume are too tight. Even cutting two pieces out of the waistband only lengthened their life by one wearing.

Blaze helped spray paint stripes onto a new pair, which are gray and black striped, instead of brown and black like the last pair.

I guess the Telsa Ranger is being retired, at least for now, because Blaze asked for me to make a gray hatband for the top hat not the cowboy hat.

Speaking of "growing out of clothes," this coat is not going to fit much longer. It's getting tight in the shoulders.
Posted by Crescent Moon at 4:09 PM No comments:

Once upon a time, this was enough to keep Blaze happy while we waited in long lines at Dragon*Con,:

but my iPod is now obsolete and won't play any of the newer games that Blaze wants, and he has become nearly inseparable from his Kindle Fire. It's time to build something new: a backpack that will hold the Kindle and reflect the teenager that Blaze is becoming.

This is the Intelligent Mobile Telephonic Devise, a Victorian smart phone.

We started with an unfinished wooden box from the craft store.

Blaze helped with the wood stain and painting.

The "speaker horn" started off as a child's tin party horn that I painted with brass Liquid Leaf. I removed the noise making part of the horn before painting, so unfortunately, we still have that for the children to play with.

The "Retro Phone Handset" was supposed to plug into a cell phone, but it does work with mine. We have discovered that it can be used like a set of headphones for the Kindle, though.

Black velvet lined interior with a pocket that holds a cloth placemat and a holder for a thermos, so that refreshments can be had wherever they are desired. There is plenty of extra room inside to pack a lunch. There is also an emergency bow tie.

The padded back, to make it more comfortable to carry. Pillow stuffing, covered with black vinyl.

The straps are two matching belts from Goodwill (they had an entire rack of identical belts, so finding two that matched was not as hard as I feared it would be). There was originally a reflective silver stripe down the middle of each belt, but I painted over the stripe with the same brass colored Liquid Leaf that we used on the PVC pipe and some of the other pieces.

I have entered my steampunk Ghost of Christmas Past costume in a costume contest.

Learning About Fossils at Wakulla Springs

This morning, we went to the Tallahassee Homeschool Group's lesson about fossils at Wakulla Spring.

I really enjoy going to these programs! They are free to attend, are entertaining and educational, and they end with the children going swimming.

Posted by Crescent Moon at 1:50 PM No comments:

Yesterday, I discovered that "Watch ESPN" was a Roku channel, on which we could watch the games of the World Cup. Today, the children caught World Cup Fever.

Blaze and I watched the game between Columbia and Greece, until just after Kitsu arrived.

Kitsu loves Pocoyo and Pocoyo.com has all kinds of World Cup related printables. This game was a big hit with her, although I'm not sure they ever figured out the rules:

This afternoon, they went to play soccer in the park.

Posted by Crescent Moon at 5:00 PM No comments:

I kept hearing ads on the radio for Food Truck Thursday around Lake Ella, but tonight was our first time going. The event is scheduled from 6:00 p.m. to 9:00 p.m. every Thursday.

We headed over to the lake as soon as we picked DH from work, so we got there early enough to find decent parking and to let the kids feed ducks before dinner.

Our dinners came from the Valhalla Grill truck and were excellent, but very messy.

If we go again, I will definitely bring something to sit on. We tried sitting on the grass, but after awhile I was brushing fire ants off my leg and picking them out of Kitsu's french fries.

Posted by Crescent Moon at 8:01 PM No comments:

It has been predicted that 2014 will be a low risk year, but people have been advised to prepare anyway. By low risk, what they actually mean is, 10 tropical storms, 5 of those storms becoming hurricanes, and 2 becoming major hurricane.

Here is a list of the names that will be used for tropical storms this year: 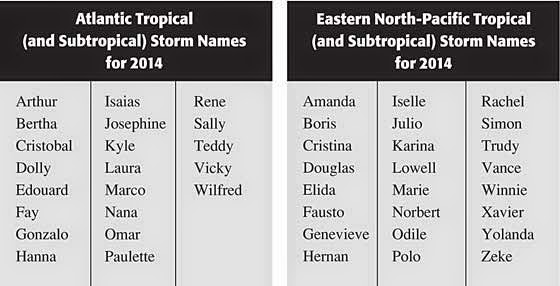 Florida had a hurricane preparedness sales tax holiday from May 31 through June 8.

Three days worth of supplies is recommended for an emergency kit and I just finished collecting ours for this year. Three days worth of nonperishable food for three people is a surprisingly large amount of food. I chose only easily transportable items, incase we have to evacuate (so I'm not counting our 20 pound bag of rice as emergency food, although it will be very helpful if we are stranded in the house for a few days). To make sure that we really do have 3 meals per day for 3 days, I have placed each meal in a labeled ziplock bag. All of the meals for "Day 1" require no cooking, so that if that day is spent stuck in traffic on I-75, we can still eat.

This is what three days worth of food for 3 people looks like: 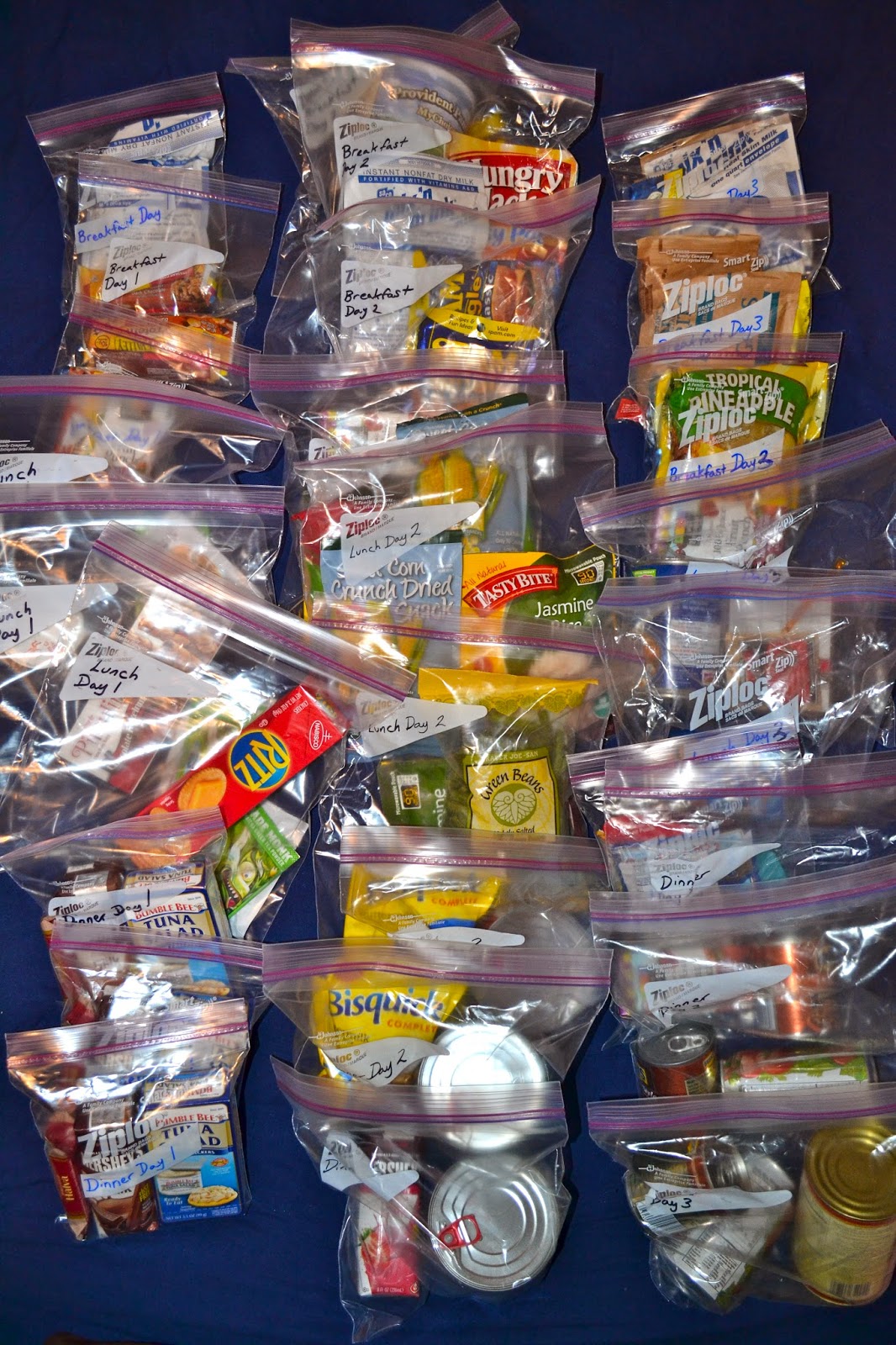 One of the fun things about this preparedness plan is that sometime around October, we get to eat all this and start collecting a new batch, so that nothing ever gets kept past its expiration date.
Posted by Crescent Moon at 8:23 PM No comments:

Our Week of World War 2 Rationing

We decided to try living for a week off of the food allowed by American rationing during World War 2.

In the beginning this seemed easy. Fresh produce, milk, and eggs were not rationed. Most meats were rationed, but not poultry or Spam.

First, however, there was a math lesson to figure out how many of each kind of stamp our family would be given. Each person over 12 years old was allotted 48 blue stamps each month. Blue stamps were used for processed foods, such as canned fruits and vegetables. They were also given 64 red stamps, which were used for meats and fats. First we figured out our family's total for the month, then we divided that by 4, assuming a 4 week month, to determine how much we would have for a single week.

Sugar rationing was separate from the other rationing. Each person was allowed 2 pounds of sugar per month. For us, that would be more than we go through in a normal month. My mother, who was 9 years old when the United States entered the war, said that the sugar shortage was usually only a problem if you had berry bushes and fruit trees and were going to do canning.

Since stores might not get shipments of rationed goods, even if you had the money and ration stamps to buy them, I chose to treat sugar as that item we were unable to get that week. We started off the week with about a cup and a half of sugar.

Although the number of points needed to buy rationed foods changed from week to week during the war, we used the following newspaper ads and documents for our experiment:

I purchased only foods that would have been available at the time, but did not always restrict myself to the popular recipes of the day.

By the end of the day on Tuesday, we had used all our ration stamps for the week.

The last of the sugar was used up on Tuesday night to bake a sour cream pound cake, which lasted for two days. After that,  honey was used as a sweetener.

A week of living off of food allowed by rationing:

Breakfast: A glass of Milk with Ovaltine for Blaze, Coffee for the adults

Breakfast: DH had oatmeal. Coffee for the adults and milk with Ovaltine for Blaze

Lunch: Peanut butter and jelly on a tortilla

Dessert: Root beer floats (ice cream shops were allowed 70% of the sugar they had been using pre-war and Barq root beer began bottling their soda for distribution at the beginning of the war)

Lunch: turkey, cheese, and lettuce on a tortilla
orange juice

Breakfast: Sour cream pound cake with fresh raspberries, milk for the child, coffee for the adults

Dinner: Great Northern Bean soup (dried beans, onions, potatoes, carrots, celery, bell pepper, ham, and a splash of milk) and homemade honey cornbread (made with honey, because the pound cake used up all of our sugar).

Preheat oven to 400 degrees F.
Blend dry ingredients together in a large mixing bowl.
Add liquid ingredients and mix until all the dry ingredients are moist.
Pour batter into greased pan (I used a cast iron skillet) and bake for 20-25 minutes.

Breakfast: a Slice of plain sour cream pound cake, coffee for the adults, and a glass of milk for the child

Dessert: one Hershey chocolate bar each

Preheat oven to 350 degrees F.
Mix apples, onion, and sage in a medium-size mixing bowl
Divide the raw sausage in half. Flatten one half into a half-inch thick rectangle and spoon all the apple-onion mixture onto the rectangle, avoiding the edges. Flatten out the second half of the sausage and place it over the apple stuffing. Pinch the top layer of sausage onto the bottom layer and form into a rounded loaf. Bake for 40-45 minutes. I baked the mock dock in a cast iron skillet and then used the drippings to make gravy. This made 6 slices, so we each had two.

Pour oil into a large frying pan and fry the onion, potatoes, and Spam, stirring and flipping them over with a pancake turner until dome. Serve with a poached egg on top.

Dinner: DH had left-over bean soup. Blaze and I had peanut butter and jelly sandwiches.
The chicken I had put in the refrigerator to defrost was still hard as a rock at 5:00 p.m.
The original plan for dinner had been chicken and dumplings.

Quiz about rationing in the United States:


In keeping with our World War 2 theme, we watched the Charlie Chaplin's movie The Great Dictator on Tuesday night.


Swimming in Wakulla Springs would have been fine way to spend a summer day during the war. The lodge opened in 1937 and Johnny Weissmuller was in two Tarzan movies that were filmed there. Here he is at the springs in 1941:

Thursday, when we went to the springs:

Friday was the 70th anniversary of the D-Day invasion. BBC Radio had a special program of the original D-Day news reports, either recorded at the time or the scripts read by modern actors.
http://www.bbc.co.uk/programmes/p01zkdry
Posted by Crescent Moon at 12:10 PM No comments: