My Mother made this wonderful cheese bread at Christmas and we were all so impressed that Ula and I both wanted the recipe.

1/4 Cup plus one teaspoon vegetable shortening

To make the starter, combine the water and yeast in a medium size mixing bowl. Stir to dissolve the yeast. Add the flour and stir until it is fully incorporated. Cover with a cloth and let it sit at room temperature for a half hour.

To make the dough, combine the water, honey, and yeast in the bowl of a stand mixer. Stir to dissolve the yeast fully. Add the shortening, flour, salt, cheese, and starter. Mix on low speed until the dough is fully developed. Remove the dough from the mixing bowl.

Divide the dough into two equal portions. Roll each piece of dough into a smooth ball. Cover each ball of dough with a warm, damp cloth and let it rest at room temperature for a half hour.

Form the dough into loaves, again cover with a warm, damp cloth and let it rise for half an hour.

Score loaves with a sharp knife and spray the dough with water. Bake for a half hour, or until golden brown.

Cool before cutting. If a bread pan was used for the baking, remove from the pan before cooling.

Email ThisBlogThis!Share to TwitterShare to FacebookShare to Pinterest
Labels: Recipes

We took a long walk through the woods and around the lake near where we live, to see how many local animals we could photograph. Here is what we found:

Then Blaze used his block crayons to make a picture of our most common wildlife around here, squirrels (if you are not counting University students) and copied a poem into his logbook.

I want to do this project again next week and see if we can find different animals. There have been some migrating birds coming through this area, so it's a perfect time for bird watching and animal spotting.
We were awakened a couple mornings ago by Barred Owls calling to each other from the trees just outside our building.
Posted by Crescent Moon at 6:21 AM 1 comment:

Blaze did some wet-on-wet water color painting to create his own island as part of our "map reading" lessons.

He started by painting his entire paper blue.

Then, using yellow paint, he painted over the blue in the center of the paper to make a green island.

After the paint had dried over night, he used a pencil to add roads, houses, a dock, and a light house to his island.

I am loving the internet this morning!

My mom, who is 76 years old, recently fell down her basement steps. She believes she has cracked her pelvis, but won't go see a doctor. Luckily this accident happened while Ula was still staying with her and could care for her for a couple days before she had to return to the University, but now my mom is on her own. She hasn't been able to go out shopping, because she has to walk with a walker, due to the injury, and that means she can't carry things.
I called her last night and she said she had run out of milk a couple days ago, but couldn't go get any more and didn't know anyone who could get it for her (my brother-in-law's mom was going to do my mom's shopping for her, but she's been in the hospital with pneumonia). We live so far away from her that I was feeling kind of helpless at first. The good daughter thing to do, would be to fly up there and take care of her until she's better, but we don't have that kind of money right now.
Internet to the rescue!
Moments after I suggested finding a grocery store that still delivers, DH had found a place on-line. He says we're lucky that she lives near one of the largest cities in the country, Chicago, because only a place that big could support a business that does nothing but on-line home-delivered grocery orders.
If you are in the Chicago area and need this service the link is here:

There was a $50.00 minimum order, but there was also a $10 off coupon for first time buyers. The prices were very reasonable, as well. The milk was cheaper than it is in our local grocery store.

We have to wait until tomorrow for the food to be delivered, but it is such a weight off my mind to know that she will be o.k.
Posted by Crescent Moon at 5:00 AM No comments:

We have started learning about Lewis and Clark and the rest of the "Corps of Discovery".
This is a history unit that lends itself well to a variety of other subjects.
Since Lewis and Clark were exploring unmapped areas of the Western United States, they had to make their own map. This is a perfect time to introduce map reading and drawing, so that is one of the things we will be doing over the next couple weeks.
Lewis and Clark were also asked to record new plants and animals they discovered along the way and to collect samples whenever possible. We will be observing the plants and animals in our area.
Another part of their mission, was to establish friendly relations with the Native Americans that they met, so we will be able to return to some of the Native American books we used earlier in the school year.

Here are the books we will be using over the next two weeks:

Here are some Lewis and Clark themed on-lines games:

Even the U.S. Mint has a Lewis and Clark activity page:

http://www.usmint.gov/KIDS/games/lewisClarkAdventure/
Posted by Crescent Moon at 5:57 AM 2 comments:

This week's "Unplugged Challenge" at http://www.unplugyourkids.com/ was "Ball". Since it is also Chinese New Year, we used little wooden balls to make a painting that is supposed to look like fireworks.

We started by lining a plastic box with black construction paper. The black was chosen to look like the night sky.

Then I squirted little blobs of paint in various spots on the paper. We used red, silver glitter, and glow-in-the-dark paint.

Next Blaze placed two small wooden balls in the box, and tipping the box back and forth, rolled the balls through the paint, until he decided his picture was finished.

Also, in honor of the Chinese New Year we will be reading this book today:

http://pbskids.org/sagwa/games/countdown/index.html
Posted by Crescent Moon at 6:24 AM 9 comments:

Yesterday was opening day of the Hoggetowne Medieval Faire.

The weather was back to being beautiful and warm by the time we left the apartment around noon (about 70 degrees) and I now have my first sunburn of 2009.

We went in costume, but we couldn't find the leggings that Blaze had worn at Halloween for his Robin Hood outfit.

Blaze's biggest interest this year was the archery booths, since this was the first year I decided he was old enough to try those.

He also decided that he really liked the "Living Chessboard", because he said it was like Wizard's Chess from Harry Potter, only with the added bonus of the audience yelling out violent cheers.

Unlike Wizard's Chess, nobody seemed to win these matches:

There were plenty of other things to see and do, too, and we saw several people we knew from the school where I work.

There was a Medieval project and writing contest for local school children and top prizes went to two of the 6th graders that I work with, although I had nothing to do with their success. One of them won the prize for best fiction writing and one of them won "Best in Show" for the trebuchet he built.

This was another project built by one of the boys in that same class:

This was our final stop before leaving the faire:

We recently saw a reality show where a chef had to come up with foods for each letter of the alphabet to feed the contestants of the National Spelling Bee. I was so intrigued by this idea that I decided to come up with our own alphabet menu.
Yesterday, with a lot of brain-storming help from Blaze and a little help from him in the kitchen, we ate our way through the alphabet.


A : Apple and Avocado

B: Banana and butter milk

X
-------------
The only letter we were unable to find was "X". There is a thickening agent used in some bottled salad dressing called xanthum
gum. but since we made our own dressing, we had none.
There is a noble gas called Xenon that is present in small amounts in Earth's atmosphere, so perhaps we breathed a little of that.
Posted by Crescent Moon at 1:31 PM 1 comment: 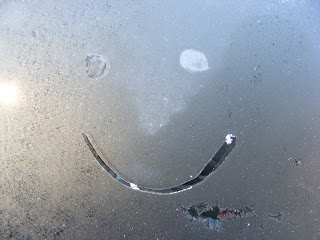 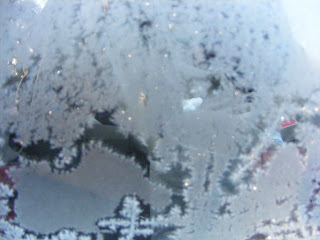 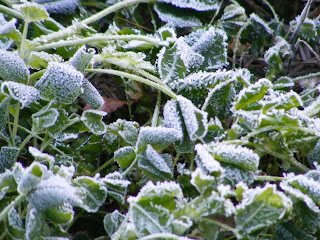 Jack Frost made one of his rare visits to Florida this week.

It's such an unusual thing to have these hard freezes here in Florida, that when I went out to the car this morning and found the windows all frosted over, I had no idea where the ice scraper was, it had been too long since we used it last. A neighbor woman, carrying a gallon jug of water, laughed as she saw me scraping at the windshield, and told me that she would offer me some of her water, but that pouring it on her car windows to defrost them, had only made the problem worse. I showed her what I was using, an expired Target credit card, and told her that was what old credit cards were for.
Posted by Crescent Moon at 10:43 PM No comments: